Obesity - Getting the Big Picture

The alarming rise of childhood obesity in Georgia has caused a controversial program to be put in place to focus awareness on the problem. Children's Healthcare of Atlanta has created a campaign called Strong4Life as a wake-up call.

One 'in your face' video from that campaign shows an overweight child asking his overweight mother, "Mom, why am I fat?"

What led Children's Healthcare to take such a no-holds barred approach to childhood obesity? Escalating obesity rates which show no signs of slowing down.

According to Strong4Life.com, almost 40 percent of Georgia's children are overweight or obese; this translates into nearly one million kids!

This ranks Georgia second to Mississippi for the nation's highest childhood obesity rates.

"Ignoring this problem is what got us here ... It's time to wake up ... We can't continue to ignore the fact that Georgia has the second highest rate of childhood obesity in the country. Kids are now suffering from diseases once seen only in adults. Start by joining the community. It's a small step in a long journey, but together we can get there," (Strong4Life.com)

Georgia and Mississippi are not alone in this national crisis. Although obesity rates in other states may not be quite as high, they are higher than in previous decades and causing great concern among health authorities.

Largely due to childhood obesity and its far-reaching consequences, today's generation of kids are at risk of dying before their parents. This has never happened at any time in America's history.

Obesity can lead to devastating health problems. Today's youth are developing diseases which were previously confined to adults.

Not any more! So many children have been diagnosed with this disease that authorities have made the term generic.

According to the CDC, one-third of American adults are obese (33.8 percent); 17 percent of children and adolescents (ages 2 through 19) are obese. 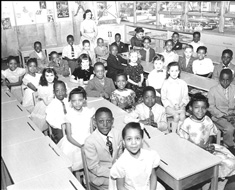 The problem of obesity in children didn't exist when I was growing up in the '50s and early '60s. As a matter of fact, the United States didn't have any obese children ages 6 through 11.

(Photo: left. My grammar school class picture was taken in the early 1960s. We were typical of children in those days in regards to being of normal weight.)

Overweight Americans aged 20 and older stood at 45 percent in 1960. The percentage who were obese in that same period and same age group was 13 percent.

The term 'obesity' comes under the umbrella of 'overweight.' A person is defined as being obese if he or she has a body mass index (BMI) of 30 or more. The BMI is based on a person's height and weight (weight divided by square of height.)

Find out if your child is obese by going to find my BMI.

Hospitalizations arising from childhood obesity grew from $125.9 million in 2001 to $237.6 million in 2005 according to CNN (based on a 2009 study published in the journal Health Affairs.)

The website CarolTorgan.com lists $237.6 million as in-patient costs only; but with prescription drugs, out-patient care, and emergency room visits, the total bill for childhood obesity adds up to a staggering sum of $14.1 billion annually!

What Is Driving Childhood Obesity?

This global epidemic (although I am focusing on America, it affects the entire world) is fueled by two factors: (a) types of food eaten and (b) sedentary life.

A healthy lifestyle requires both good nutrition and exercise. But nutrition makes up the lion's share at 80 percent. Eating right consistently is the more difficult task and the most important. Get this right and any exercise program will fall in place.

Did you realize that according to a sizeable federal study that almost 25 percent of the calories that Americans consume are from soft drinks? And almost one-half of all Americans over the age of 4 has a sugary drink every day.

The typical American drinks nearly 54 gallons of sugar-laden soft drinks each and every year!

These soft drinks and beverages contain a lot of sugar. One sweetener, high fructose corn syrup, is especially dangerous. It is not metabolized like ordinary table sugar.

Even 100 percent fruit juice contributes to the out of control obesity rate. The process of juicing removes the fiber from the fruit which slows down sugar absorption. This signals a sharp insulin spike in which fat is stored and not burned.

Gallons of fruit drinks, juices, sodas (diet and regular), sports drinks, and sweetened teas are drunk every year. And this is not even considering the gallons of lattes and Dunkin' Donuts' coffees regularly consumed!

I had a massive sweet tooth when I was growing up. I drank sodas, iced coffees, and ate plenty of ice cream, pastries, cookies and candies. But there weren't as many artificial sweeteners in the late '50s and early '60s as there are today.

For one thing, high fructose corn syrup hadn't been invented then. It made its first appearance in 1967. But it didn't become widely used in soft drinks until the mid '80s.

The transition to vegetable oils like corn, canola, and safflower in the 1980s, along with the glut of low-fat food products, contributes to children obesity too. Saturated fat was blamed for contributing to heart disease and was subsequently made the enemy to a healthy lifestyle.

Vegetable oils and low-fat products was the answer. In hindsight, researchers now see that the steep climb in obesity rates coincided with the replacement of saturated fats like lard, butter, and red meat with low fat mayonnaise, margarine, vegetable oils like Crisco, and other food products. Read this article which will give you a background of vegetable oils.

To add to the overwhelming presence of fat-promoting products is the fact that your kid's schools have vending machines overflowing with snack foods and soda. In addition, there are numerous convenience stores and fast food restaurants within walking distance of where they live too. Children don't stand a chance!

Another factor which promotes obesity in our children is that they don't eat nearly the amount of fruit and vegetables that they should. And healthy fats like omega-3 fatty acids, conjugated linoleic acid (CLA), and saturated fat from grass-fed beef which promote healthy body weights are rarely, if ever, eaten.

The first step in protecting your children from shortened lives and the possibility of developing a chronic illness is to not allow sodas and other soft drinks into your house. Naturally this means that you as a parent will have to stop drinking them.

When something non-nutritious is given up, you need to replace it with something nutritious. Drink more water. Your body needs it and there is nothing that will quench your thirst like it.

What I sometimes do is squeeze a fresh lemon into the water; if lemon is not your cup of tea, try a lime.

Eat home-cooked meals. No restaurant prepared food can match it as far as nutrition is concerned. Meals cooked at home will not have MSG (monosodium glutamate), a flavor enhancer which has produced cancerous tumors in laboratory rats and can cause weight gain.

Neither will your prepared meals have artificial sweeteners, preservatives, or colors in it.

Instead of potato chips, pretzels, and other store bought snack foods, keep fresh fruit, raw vegetables, and nuts like almonds and pecans around.

Cook with organic, extra-virgin coconut oil instead of vegetable oil. Contrary to what is commonly taught, the fat in coconuts will make you lean, not fat. Another important fact about coconut oil is that it will not break down under high temperatures. (Read more about home-cooked meals.)

Modern technology has been a blessing and a curse. Sure we can do things more efficiently, faster, and more conveniently, but there is an unfortunate downside. It has made us lazy.

Let me use myself as an example. I am at my laptop right now writing this piece. I spend hours upon hours sitting at the computer which studies have proven is detrimental to your health.

Back in the day there were no personal computers, cell phones, video games, internet, surround sound, or 24/7 satellite or cable. As a matter of fact, it wasn't until the early '60s that my father bought our very first television.

As a kid growing up in Jersey City, New Jersey, we played outside when the weather was nice. We had no choice. Even if we didn't want to, our parents made us.

While outside, we didn't just sit on the stoop watching cars go by. We played. My sisters jumped rope, or we played 'Giant Steps' and many other games. We ran, jumped, and walked a lot.

And back in those days, physical education was mandatory in grammar and high school. We were very active.

Not so today in the 21st century. There are too many technological distractions. And physical education is no longer mandatory in our educational system (if it is even offered at all!)

A British study discovered that today's lifestyle has made children less fit. The study begun in 1998 looked at 600 ten year olds.

Ten years later, in 2008, researchers tested ten year olds and found that 95 percent of the ten years olds from 1998 ran faster than the ones from 2008. The caveat is that these kids were not obese.

Although the study looked at English children, I am sure the results would be duplicated here in America.

The remedy for your kids' sitting around the house watching, talking, and playing video games is to simply get them moving. This is first lady Michelle Obama's exercise fix for our children.

Mrs. Obama revealed her Let's Move! campaign on February 9, 2010. Children have to be taught, encouraged, and made to curtail watching too much TV, spending too much time playing video games and talking on cell phones.

Studies have shown that children watch far too much television. One fix for this is to not allow a television set in their bedrooms. I know this is radical thinking - and that I am retro, old school, and basically just an old stick-in-the-mud - but our children's obesity crisis requires radical measures.

If radical moves are not taken, we will lose our kids.

But, again, parents have to set the example. Lead by example.

Childhood Obesity - All Is Not Lost

Childhood obesity is serious and drastic measures need to be adopted in order to halt its growth, and finally, reverse it. But in order for this to happen, it must begin at home with the parent.

This article is directed to you the parent. Before you can help your child, you must become educated to the problem, and its seriousness and ramifications. It is serious because it is growing (no pun intended); the ramifications are that more children are developing what was once adult diseases, and being placed on prescription drugs.

The resulting chronic diseases are slicing up to 5 years from your child's life. Obesity affects quality of life and self-esteem.

Performing a kitchen and pantry makeover to remove all foods which contribute to bad health and obesity is a must. Replacing these processed foods with wholesome, nutrient-dense foods is a small price to pay for your child's health.

Also, children are America's future. We don't want a future America populated with chronically ill adults unable to function at their full potential due to crippling obesity.

Make the eradication of childhood obesity your top priority in 2012.

You owe it to yourself to watch the HBO documentary entitled, The Weight of America.