Rather than helping consumers lose weight, these sweeteners are not only contributing to accelerating obesity rates, they are also being implicated in serious medical problems. It has been estimated that Americans consume over 20 pounds of sweeteners per year! In 1986 The American Cancer Society documented that people who use artificial sweeteners gain more weight than those who don't use them.

The very first artificial sweetener ever discovered, saccharin was accidentally found in a chemical laboratory at John Hopkins University in 1879. Over 300 times sweeter than sugar, this sweetener is now used in a variety of products from toothpaste and chewing gum to canned fruit, salad dressings, and baked goods. Sweet'N Low is saccharin based.

In the late 1970s a Canadian scientist tested saccharin on laboratory animals. Fifty percent of these animals developed bladder cancer having been fed high doses of saccharin. The FDA (Food and Drug Administration) confirmed that saccharin was carcinogenic in its tests.

Banned after the Canadian tests, the FDA rescinded its ban on saccharin in 1991 as a result of its tests on people who used large quantities of the sweetener. These tests were conducted largely on diabetics and did show a correlation between saccharin use and cancer. AVOID THIS AND ALL SWEETENERS.

Discovered in 1965, aspartame is better known commercially as NutraSweet and Equal. Aspartame is an excitotoxin. Excitotoxins cause brain cells to fire continuously when they make contact with it. Eventually these cells die. Also aspartame is completely metabolized (broken down and absorbed) by the body. When this happens one of the chemicals which is released is methanol (wood alcohol), a toxin. Methanol can break down into formaldehyde in either hot or cold environments. Formaldehyde is a carcinogen (causes cancer.)

Aspartame attacks the body at the cellular level. Because it attacks at this level, common medications you may take are rendered ineffective. This includes but is not limited to antidepressants, Coumadin (Wayfarin), cardiac drugs, hormones, insulin, and vaccines.

Since aspartame is a neurotoxin (it poisons the brain), it can lead to such neurodegenerative diseases such as Alzheimer's and Parkinson's diseases. AVOID THIS AND ALL SWEETENERS. 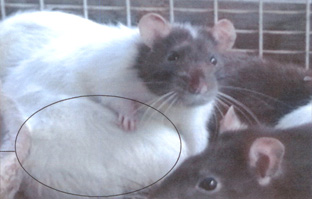 Victoria Inness-Brown, M.A. became concerned because her family was addicted to diet soda (notorious for their amount of aspartame.) After performing a thorough research on this excitotoxin, she believed that it would one day lead to health problems--or even their deaths.

Victoria decided to conduct her own experiment. She used 108 rats and the study lasted two years and eight months. The photos left show the results of her experiment. The rats in top photo became severely obese. The one in the bottom photo developed a mammary tumor. 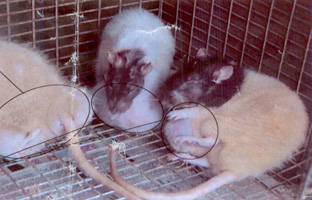 Compounding the dangers of aspartame is the fact the it is sourced from a genetically engineered organism.

Like aspartame and saccharin, sucralose is a chemical which was accidentally discovered in a laboratory. In 1975, an Indian graduate student at Queen Elizabeth College in London and his advisor, were working together to find a new insecticide. Instead an artificial sweetener which is 600 times sweeter than sugar was discovered.

Splenda is America's number one sweetener. Well known diet plans whose foods use splenda are Atkins and South Beach.

Splenda is made with chlorine which is extremely toxic. Despite the claims of its manufacturer, chlorine in its free form is not found in nature. This means that it is NOT natural. The Environmental Protection Agency (EPA) classifies chlorine as a class-one carcinogen in humans (it causes cancer.)

This artificial sweetener is commonly used in sugar-free mints, chewing gum, cough syrups, and diet drinks and ice cream. It has been found to cause severe bowel problems, diarrhea, pain, and weight loss.

These effects were discovered quite by accident. Dr. Juergen Bauditz of the University of Berlin and colleagues, began investigating when two of their patients complained of abdominal pain, diarrhea, and weight loss.

A 21 year old woman lost over 20 pounds and had been suffering discomfort for eight months. Another patient lost 49 pounds after suffering diarrhea for over a year. Both were chewing between 15 and 20 sticks of sugar-free gum daily.

"Our cases demonstrate that sorbitol consumption can cause not only chronic diarrhea and functional bowel complaints, but also considerable unintended weight loss-about 20 percent of usual body weight," wrote Dr. Bauditz.

This study was published in the British Medical Journal.

There seems to be an endless number of artificial sweeteners on the market. Here's another one that you may or may not of heard -- neotame.

Neotame has been approved for use in food and beverages globally since 2002. Unlike seemingly ubiquitous sweeteners like Aspartame and Sucralose, neotame's use has been limited.

This supposed improvement came about with the addition of the chemical 3-dimethylbutyl which just happens to be on the EPA's most hazardous chemicals list. Monsanto applied for neotame's FDA approval in 1998.

Neotame was created by combining aspartame with 3,3-dimethylbutyraldehyde.

It's approval is more encompassing than aspartame's. It can also be used in baked goods. The reason is that neotame is more stable than aspartame at high temperatures.

The hazardous chemical 3-dimethylbutyl was added to block enzymes that break the peptide bond between aspartic acid and phenylalanine, thereby reducing the availability of phenylalanine. Products containing neotame do not need to be labeled to warn consumers who cannot properly metabolize phenylalanine.

Manufacturers of neotame assures consumers that it is safe. Yet 3,3-dimethylbutyraldehyde is categorized as being very flammable and an irritant. Precautionary measures have to be undertaken when it is handled because it affects the skin, eyes, and respiratory system.

Despite the hype about the weight-reducing effects of artificial sweeteners, they lead to weight gain and obesity. Phenylalanine and aspartic acid are two amino acids that comprise 90 percent of aspartame. These amino acids are present in neotame.

Phenylalanine and aspartic acid have been shown to quickly trigger the release of leptin and insulin -- hormones tied to satiety and fat storage. They also regulate your metabolism.

Just as your body can become insulin resistant, i.e., lines of communication between the cells of your body the pancreas become disrupted, you can become leptin resistant. When that occurs, you don't get messages to stop eating and start burning fat.

You remain in a state of continual hunger, you crave sweets, and your body stores fat.